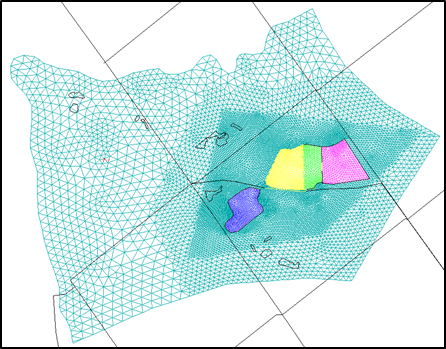 Groundwater simulations were undertaken to predict the movement of contaminants from two landfills situated near a sand and gravel quarry. When the landfills were originally designed and constructed, quarry operations were limited to shallow sand and gravel deposits, isolated from a deeper aquifer by a confining clay layer. Upwards groundwater flow conditions existed beneath the landfills under the original landfill design conditions. Approximately 10 years after the start of landfill operations, the quarry operator excavated through the confining unit, causing the potentiometric head in the aquifer to drop by over 6 m (20 ft). Downward flow conditions were induced beneath the landfills as a result of the dewatering. To obtain a new certificate of approval for the continued operation of the landfill, detailed investigation, monitoring and predictive modelling of potential contaminant impacts were conducted.

Finite-element groundwater flow and contaminant transport models were used to predict the time, position and impacts of contaminants migrating from the landfills. A mesh containing over 17,000 triangular elements was created with smaller elements used near the landfill sources to improve calculation accuracy (Figure 1). A window in the confining unit required the simulation of a partially confined aquifer.

The groundwater flow model was calibrated against the measured flow from the dewatering ponds. Modelling indicated that the complex pattern in the observed potentiometric heads was due to both variation in the aquifer thickness, and channels of higher permeability associated with coarser grained sediments. Modelling indicated that the dewatering ponds did not create a uniform drawdown cone and that the ponds had a greater influence to the south and east of the site. Calculated groundwater velocities varied significantly within the aquifer, resulting in complex contaminant migration patterns.

Contaminant transport simulations indicated that variation in aquitard leakage controlled source impact on the lower aquifer. Higher groundwater flow velocities under the east landfill resulted in reduced the concentrations, yet caused earlier arrivals of contaminants at the dewatering ponds to the northwest. Modelling also indicated that steady state plume conditions (the time at which dilution and spreading of the plume reach equilibrium) occurred under the east plume approximately 25 years after the start of dewatering (Figure 2). The groundwater modelling clearly indicated which factors control leachate impacts at this site, and provide information necessary to minimize leachate impacts from the landfills. 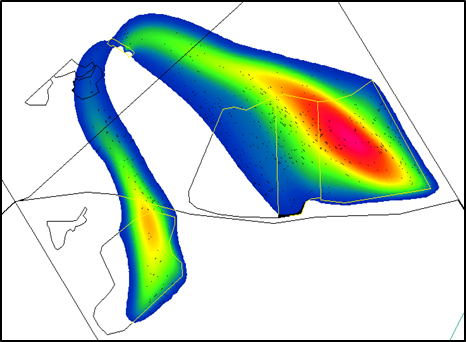