Earthfx developed a 3-dimensional groundwater flow model to analyze the impacts of construction dewatering for the Southeast Collector (SEC) Trunk Sewer on groundwater and stream baseflow. The work was done in support of the Hydrogeological/Geotechnical Southeast Collector Trunk Sewer Environmental Assessment. This study followed an earlier modelling analysis for route selection, also completed by Earthfx.

The numerical model developed for the area surrounding the SEC encompassed the Rouge River and Duffins Creek watersheds. The model built on the geologic database and conceptual hydrostratigraphic model for the Oak Ridges Moraine (Kassenaar and Wexler, 2006). Additional geologic and hydrogeologic data collected by Conestoga-Rovers & Associates (CRA) were used to refine the local hydrostratigraphy. Groundwater level and streamflow data collected by CRA served as targets for model calibration. 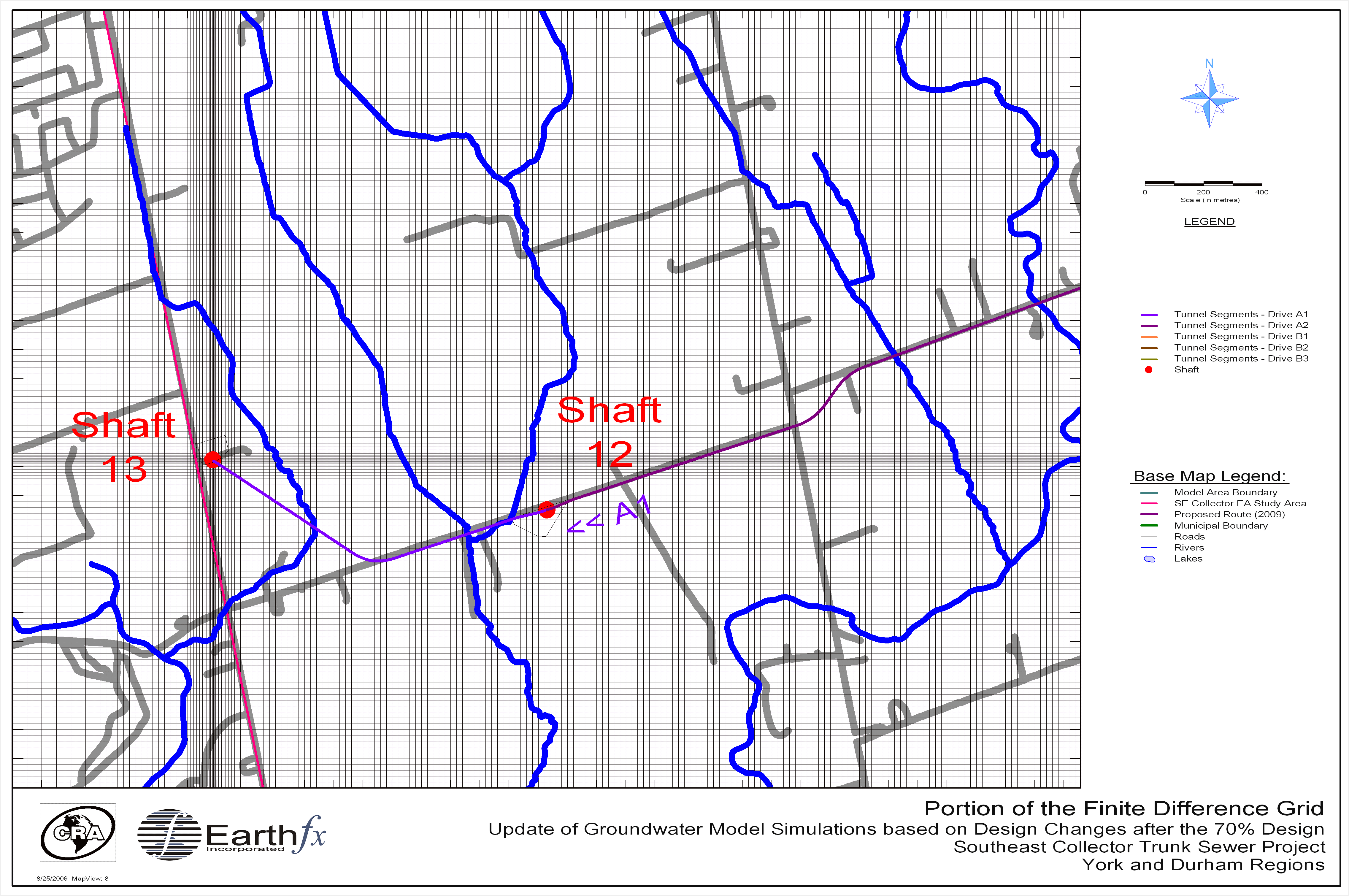 Eight numerical model layers were used to represent the aquifers and aquitards underlying the Rouge-Duffins area. A model grid consisting of 480 rows by 960 columns was designed with refinement in the vicinity of the sewer centre line and nearby streams. The grid was further refined in the vicinity of Shaft 13 where significant dewatering was needed for the hook-up to the existing sewer. Groundwater discharge to streams was simulated using MODFLOW “drains” for headwater tributaries and MODFLOW “rivers” for the lower reaches of major streams. Recharge to groundwater was estimated using the USGS PRMS model. Water budgets were computed on a cell-by-cell basis using daily climate, land use, soil, and topographic data.

The SEC was constructed using tunnel boring machines (TBMs). The amount of dewatering required for tunnelling depended on the type of TBM and the properties of the formation through which the TBM passed. Ten vertical tunnel access shafts were constructed from the surface to the tunnel elevation for launching, retrieving, and repositioning of the TBMS. The amount of dewatering for the shafts depended on the depth of the structure, properties of the units penetrated, and the construction method selected.

Two scenarios were considered: (1) a baseline scenario using standard TBMs and shaft construction techniques that require dewatering ahead of construction; and (2) a “mitigation scenario” using sealed shaft and EPBM technology that minimizes dewatering requirements. In both cases, the route and the invert elevations were selected such that much of the sewer passed through the low-permeability Newmarket Till. Only 10 m of the tunnel wall was exposed at any time, reducing the amount of groundwater control needed to facilitate construction. Four TBMs were launched simultaneously to minimize the duration of construction activities. Time-varying constant head cells were used in the model to represent the progression of the open areas.

A number of general conclusions were drawn from the simulations. Constructing the bulk of the tunnel through the Newmarket Till lessened the likely impact of dewatering for the SEC. The most significant drawdowns were due to pumping at Shaft 13, which penetrated the deeper Thorncliffe aquifer. Comparatively localized drawdowns occurred in the vicinity of the shafts that open to the shallower Newmarket Till. Drawdowns due to the tunnelling operations with a standard TBM were generally limited to 200 to 400 m on either side of the tunnel alignment. Wider areas of drawdown occur when the TBMs approached or exited the shafts. Groundwater discharge to streams was affected, with loss rates comparable to, but less than, the simulated takings at Shafts 4 and 13. Mitigation eliminated the drawdowns along the tunnel alignments and reduced the length of time of pumping at Shaft 13. 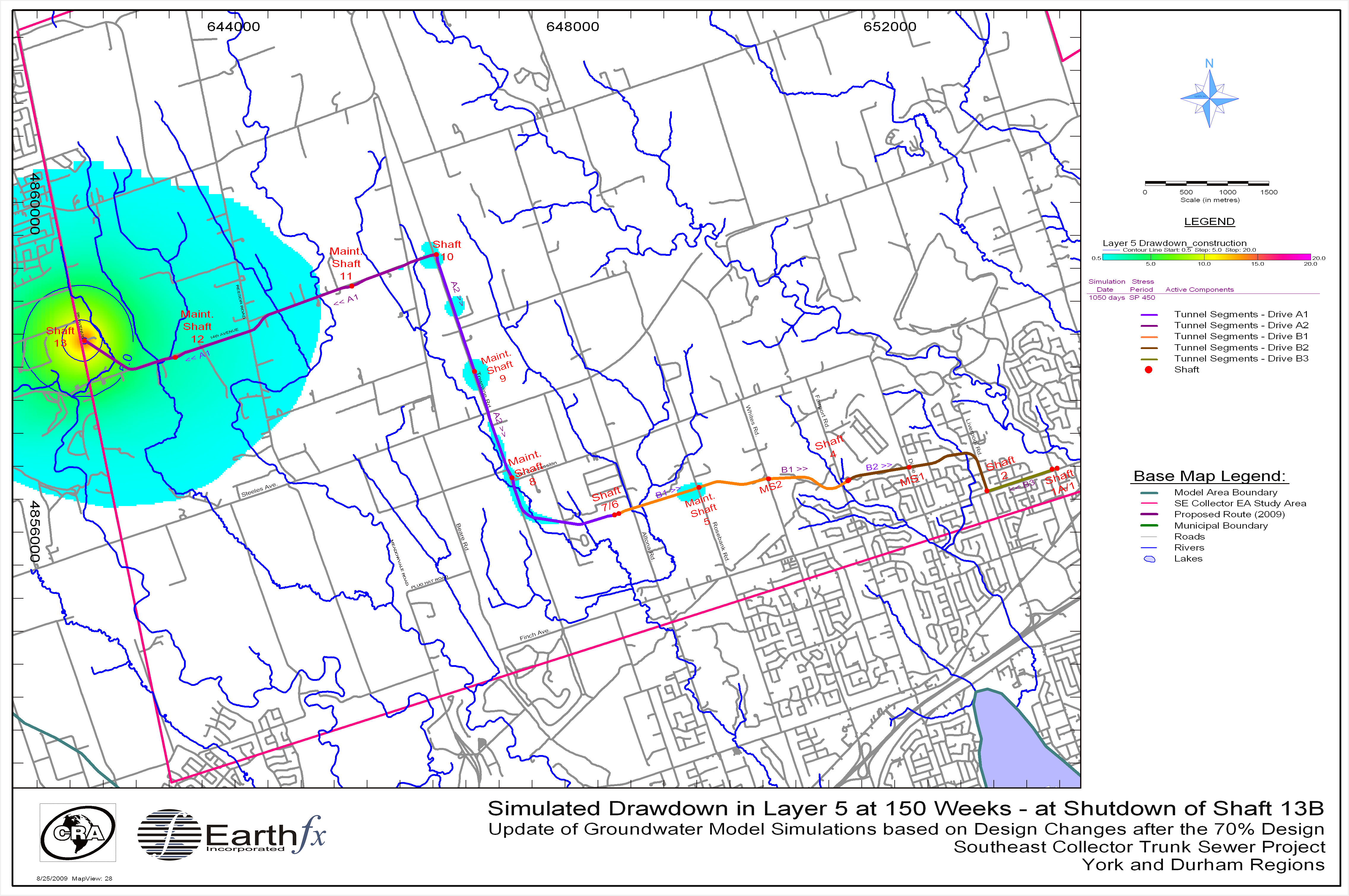