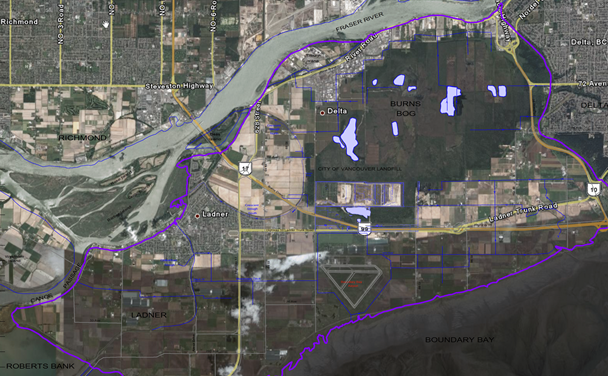 Earthfx hydrogeologists developed a groundwater model of the Vancouver Landfill in 1995 and refined the model in 2000. Earthfx, in partnership with Sperling-Hansen Associates, further refined the model and updated the site database in 2008.

Leachate and runoff from the facility are collected by a twin ditch system that runs along the perimeter of the site. Contaminated water from the inner leachate collection ditch is pumped via a forcemain to a treatment plant. Water levels in the outer ditch are kept high to prevent off-site leachate migration into Burns Bog. 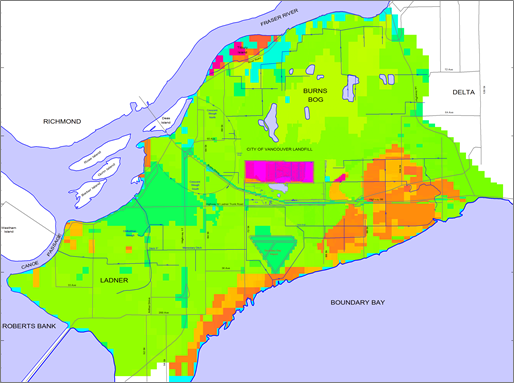 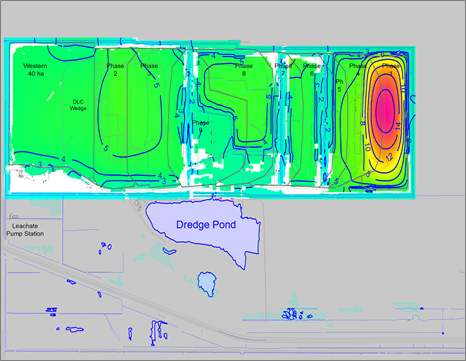 A coupled hydrologic model (PRMS) and groundwater model (MODFLOW) was developed to help estimate leachate generation rates and to assess groundwater flow on the landfill site, as well as in Burns Bog and the Ladner area. The coupled models combine factors affecting recharge and groundwater flow including topography, climate, land use, surface water controls, geology, hydrogeology, and groundwater stresses (e.g., pumping, and changes to leachate generation rates due to placement of final cover). The PRMS model was run for a seven year period spanning October 2000 through 2007. Estimates of daily water budget items, such as precipitation, ET, runoff, and groundwater recharge were averaged over the simulation period. Rates vary within the landfill site as a result of local variation in slope, slope aspect, and vegetative cover. The annual average recharge rate was applied to the upper MODFLOW model surface.

Simulated hydraulic heads within the peat layer were typically within 1 m of ground surface in Burns Bog and flow is radially outward from the centre of the bog. The model indicates that the twin ditch system has a strong influence on water levels in the peat and disrupts the natural flow system. 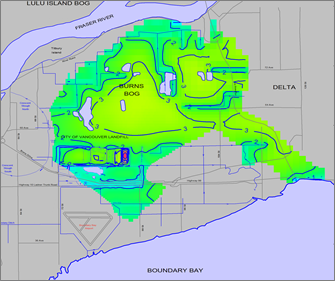 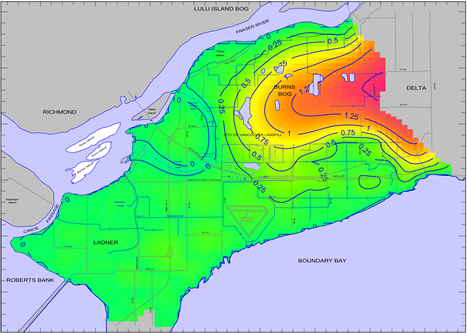 Heads in the deeper sands showed little effect of the leachate mounding on the sand aquifer flow system. Downward gradient induces vertical leachate flow, albeit at a slow rate, through the peat and silt aquitard toward the sand aquifer. Lowering the leachate levels by controlling infiltration, especially in the Phase 1 area, would further reduce leachate loadings to the sand layer.
Particle tracking analyses were conducted to evaluate the effectiveness of the leachate containment system. Results showed that most of the flow to the inner ditch originated from within the landfill area with smaller contributions from interception of regional flow. Additional analyses showed that leachate travels vertically downward through the refuse and into the DLC layer and then into the inner leachate ditch. A small number of particles (4%) escaped past the inner ditch or penetrated through the compressed peat and silt layers into the sand aquifer. Most of the escaped particles were captured by the dredge pond, the remainder discharged off site. Results indicated that there was a potential for offsite leachate migration.