Simulation of Groundwater Flow in the vicinity of the proposed Reeb Quarry, Town of Wainfleet, Ontario

A groundwater flow model was developed for the proposed Reeb Quarry and surrounding area. The property is located south of the Wainfleet Bog and west of the City of Port Colborne. An active quarry and a rehabilitated quarry are located on lands to the north and southwest of the property, respectively.

The primary objective of the model was to better understand the local hydrogeology and to assess the potential impact of quarry development on groundwater levels, groundwater discharge to streams, and nearby water users. Longer-term objectives included using the model to provide guidance on managing water use at the quarry and to minimize the potential for adverse impacts as construction of the quarry proceeds. The model area extended from the Lake Erie shoreline in the south to the Welland feeder canal in the north and is bounded by the Welland Canal to the east. 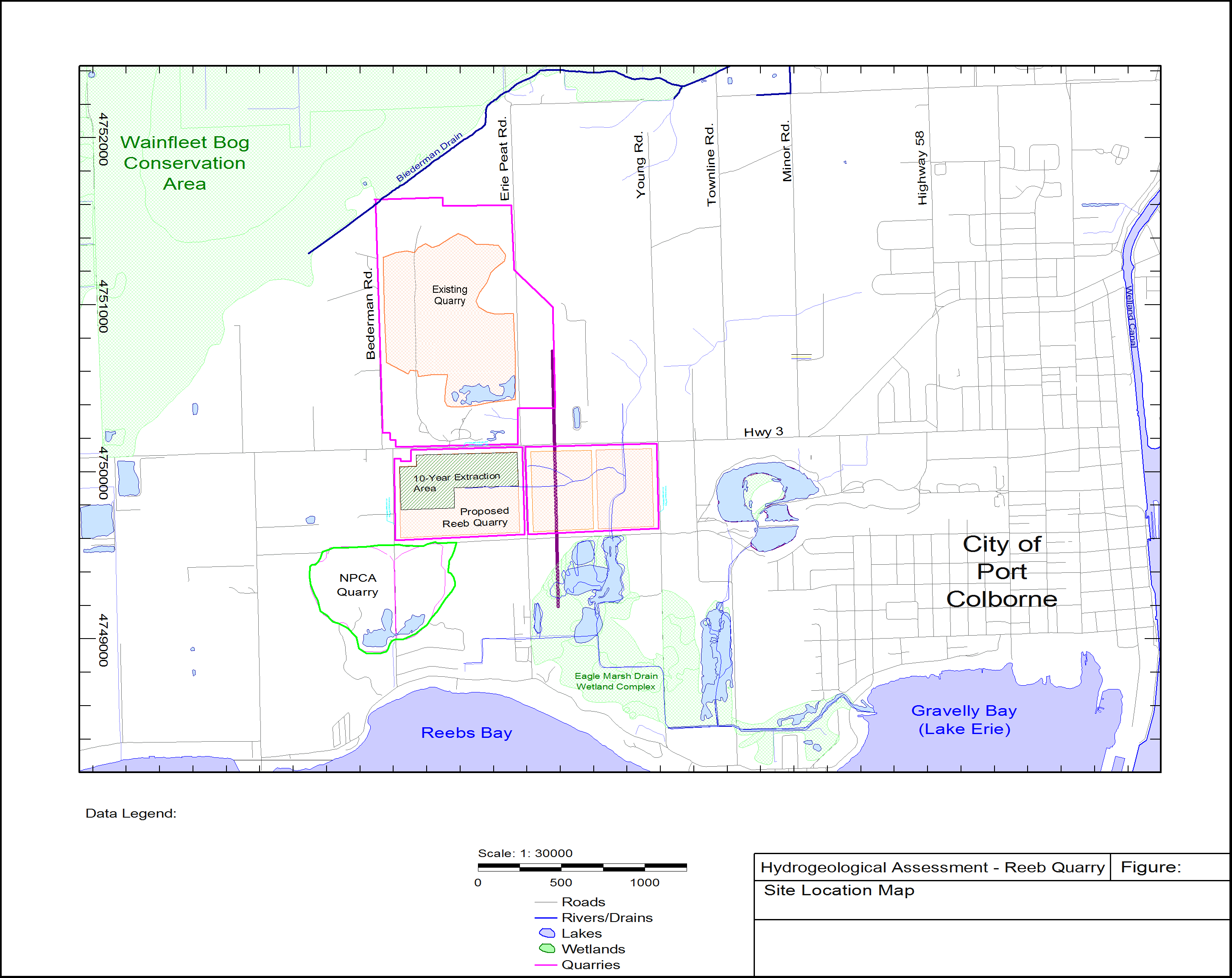 Model development started with an assessment of bedrock and overburden stratigraphy, aquifer and aquitard properties, and rates of groundwater recharge. Of particular concern was the extent and continuity of fractures which control flow in the shallow bedrock. Bedding plane fractures were found to be the primary fracture set and form continuous transmissive zones while less frequent vertical jointing limits flow between units. Fracture frequencies and spacing decreased with depth.

The calibrated model was applied to simulate the effects of mining the proposed quarry to the bottom of the Falkirk Formation which, because of the southward dip, places the quarry base about 5.0 metres below the floor of the northern quarry. Dewatering for the proposed quarry therefore results in lower water levels but the incremental effect of the proposed quarry is minimized by the close proximity of the existing quarries. The Reeb site drawdown cone extended eastward under the Eagle Marsh drain. Induced leakage from the drain, which was assumed to have low permeability bottom sediments, may actually help limit the extent of the drawdowns and further study was recommended.

The cumulative impact of the quarries (from pre-1961 conditions) to the proposed future conditions showed that the drawdown from the northern quarry would extend under the Wainfleet Bog, while the Reeb site drawdown would extend more to the east and the west of the property.